Every adventurer and warrior-in-arms has at one point or another heard of the land of the Smash Brothers. Some tales speak of legends; others speak of grown men losing to children. But here, here in our leader Nyx's basement, we band together as comrades-in-arms to sever those very bonds of friendship in an all-out fight to the death!

It's not a bloodbath, though. Heaven forbid! Instead, like civilized folk, we chart out a bracket and cast lots to determine the order of the slaying. We also have a double-elimination rule, which is a fancy way of saying that two defeats means banishment from the blessed land of the Smash Bros. Our potions of resuscitation make this double defeat doable.

Once order is established, we meet on the battlefield. While we have six to choose from (Smash Bros. 64, Melee, Brawl, Project M (PM), Smash for 3DS, and Smash for Wii U), most of the time we trek to the bloodiest and harshest landscape of all: Melee. There the nights are long, the days blistering, the wind chafing, the terrain only for the hardiest of warriors.

In Melee, countless have fallen due to failed wave dashes, improper dodging, impatience, or just a simple experience gap. Every time the pecking order changes, but Nyx has somehow managed to win every single tournament we've ever held. Until August 29, 2014. FluffyWaffles defeated Nyx in a heated first round, only to be bested in the finals after Nyx clawed his way back from the jaws of death. 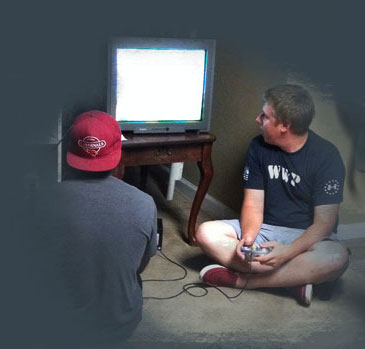 Anticlimatic as that may seem, fourteen solar cycles later, at our next showdown, long-time underdog Whoopsiez slew the mighty Nyx in the final round of the winner's bracket, only to fight him again in the grand finals since he flew on eagle's wings to the top of the loser's bracket. The battle was intense. Lasers rocketed about and tiny hands backhanded space birds. Fire burst forth from a sleeping giant, and the end was clear: Whoopsiez had won.